Welcome to Caloosahatchee Cowboy Charters. I am a 4th generation native to Fort Myers, Florida. I grew up fishing the Caloosahatchee and surrounding waters of South West Florida. I started my salt water career in 1996 fishing with my dad and his buddies. I started guiding professionally in 2010. I am jack of all trades and master at catching Giant tarpon and big snook. I live to tarpon fish and I am one of the best. Please come join me and allow me to share my love and passion of fishing with you. I am here to show you the best possible time and give you a trip to remember for a lifetime. 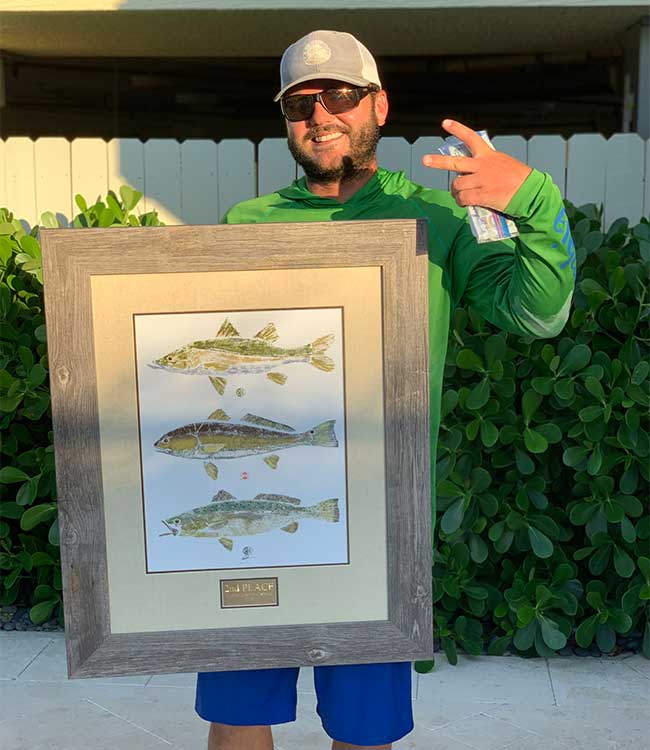 WHAT IS GOING TO SEPARATE ME FROM THE REST: I can catch Tarpon almost all year long. Besides that, I go out of my way each and every day to make sure we have the best baits that I can possibly catch. I put in the extra time to find them. I do not just take you out at any time of the day. I research the tide and take you out when the fish should be biting best. I run further and longer than most guides will. I am not out here to fish the mouth of the river with shrimp for lady fish and snapper. I want each and everyone of my guests to catch a trophy a fish. Once stepping aboard my boat the potential to catch a trophy fish is there. I am here for you and want to accommodate my guests in anyway that I possibly can.

I am out here because I love fishing! I want to share and teach my passion I have for the art of fishing. In the process I want to become friends, and develop long term relationships with my clients. I want to make your trip as memorable as possible and keep you coming back year after year!

HOW I LEARNED TO FISH

I grew up fishing Bass in the canals of North Fort Myers and Cape Coral with my cousin “Bug”. Bug taught me how to fish, I would sit in the back of his three wheeled granny bike with a 5 gallon bucket, a bubbler, loaf of bread, two bass rods, a custom blue gill rod that I stole and made from the neighbors umbrella tree, and a tackle box. We would ride all over the neighborhood in search of uncharted bass waters. Bug and I would chop down trees and limbs to create underwater habits for bass so we could always have secret spots to catch if our explorations didn’t pay off. When I was about eight years old Bug started to take me to fish spill ways and the bridges of the Caloosahatchee for snook. In 1996 we got my dad into fishing. We guided my dad to his first snook one night; he was hooked on fishing just like I was. That next day he went out and bought brand new action craft. This is when my love for fishing soared to another level. I fished and guided on that flats boat until 2015. I caught my first big keeper Snook, my biggest snook, my first tarpon, my first redfish, kissed my first girl, won my first tournament, and explored thousands of miles of shorelines and water in that boat. It was an unbelievable fight. After catching that first big snook, the power was unlike anything I had ever felt before. I was on top of the world after that day. My freshwater fishing days ended right then and there. I never wanted to fish for rinky dink ole bass ever again! All I ever wanted to do from that day on was snook fish, until the night I discovered what a tarpon was.

I remember one night sitting underneath the Cape Coral Bridge with my dad at 2 in the morning and we kept seeing these massive explosions! I said dad what in the world are those? Being beginners in the saltwater world, we had no earthly idea what they were or even how a fish could disrupt the surface of the water like that? It literally looked like someone was dropping cinder blocks of the top of the bridge. That’s when a good friend of my father said they were “Tarpon”! I was mesmerized by them, I had to catch one.

One day, a charter captain friend of my dads, Jeff Koza took us to Boca Grande Pass to try to land our very first tarpon. They were everywhere! We hooked up and caught two that day. After seeing the size and sheer power of the Tarpon I fell deeper in love with fishing and with the tarpon, I was bound and determined to get one for myself. I spent years learning and trying to catch a tarpon, I never could get one boat side. I went 0 for 16 before I ever boated one. That didn’t stop me.

Finally, after years of trying, searching, learning and never giving up I have figured how to catch tarpon on a consistent basis pretty much year round. I have become one the best tarpon fishing guides in Fort Myers. I could not have done it without a little help and thanks to my good friends Capt. John Landry, Stovester, Fishin’ Florie, numerous guides, and legends along the way. Ozzie Fischer (top 5 captains in the United States), Capt. Eric Davis, Capt. Randall Marsh, Capt. Ozzie Lessinger, Capt. Cameron Schurlknight and Capt. Chris Rush have all been idols and mentors to me. These guys are all legends, the best of the best, and veterans in tarpon slaying business. I wouldn’t be the tarpon angler I am today without their mentorship and friendships. Thanks guys. To beat them all those guys in 2018 during the 7th annual Ding Darling Doc Fords tarpon tournament was one of my greatest accomplishments in my guiding career.

For tarpon on personal time, my ultimate favorite spot to tarpon is the Florida everglades. I have spent many a day and night throwing giant lures with my tarpon buds in the glades. That hands down is unlike any place on this earth. It’s the best. I also thoroughly enjoy a place off of Marco Island called the mud hole. This is where all the Giant Tarpon stage before making their way to my favorite charter fishing spot, Knapps Point, off of Sanibel Island. This is my bread and butter. I live out here majority of tarpon season. They get out here by the thousands. This is where I won my pink jacket and title of boss silver king of 2018.

For snook, the Caloosahatchee River has to be my favorite. I spent most of my early childhood in that river and a majority of my career cruising up and down its shorelines in search for giant snook. However over recent years I’ve grown quite fond of the passes. Here the snook stack up in great numbers and offer some killer action when the bites on.

For red fish, Louisiana is my ultimate favorite for giant redfish. Out of the 4 times I’ve been there I don’t think there was a day where we didn’t catch over 30 redfish. Locally, Pine island sound, docks, and in the Gulf of Mexico would have to be my favorite. You have to know where they get to win the tournaments.

WHERE I’VE BEEN AND WOULD LIKE TO GO AND FISH

Costa Rica in 2019 was a treat. Costa Rica was great for big sailfish, tuna, and dolphin fishing at Los Suenos specifically. We went for the Blue Marlin but did not get him. I will be back to do the FAD’S for my blue Marlin. That is supposed to be incredible action.

MAG bay is also on the bucket list for the striped marlin run.

Panama and or Australia for my black marlin.

I want a Giant trevalle! The Great Barrier Reef and Indonesia is supposed to be bad to the bone for them!

I had the pleasure of guiding in Alaska at the best salmon lodge around, Angler’s Alibi. I did that for 3 months in the summer of 2011.

I’ve been all over the Florida Keys offshore and inshore. They keys is an unbelievable fishery and I place you can never get sick of. The variety and amount is unreal!

The Tortugas is my favorite bottom fishing area ever. It has it all, mutton snapper, red snapper, black grouper, scamp grouper, yellowtails, tunas, wahoo, dolphin, red grouper, you name it it’s all there.

I was in the Marquesas in 2008 with friends for 5 days. That was awesome! We caught tons of permit, snappers, lobsters, and sharks. We went to catch tarpon but they weren’t there. So on our way back we crammed all 8 of us in one room at the big pine motel and fished the Bahia Honda Bridge. We fished it for two days and jacked the tarpon. Both boats hooked like 30 in the one afternoon and the next day. I was even fortunate enough to see a worm hatch which only happens on specific days and tides there. This was an incredible visual spectacle that I will never forget.

Chatham in Cape Cod was awesome! There I fish my buddy John for stripers and giant blue fin tuna. We crushed the striped bass and I hooked into one tuna on a bass jig which didn’t end will. The tuna one and straightened out my hook.

Prince Edward Island, Nova Scotia is at the top of my list for a 1000 pound giant blue fin tuna!

The Bahamas is beautiful and one heck of a time! A dear friend of mine had a house there before hurricane Dorian took it away in 2019. We were there for a bachelor party and went there to target Wahoo. Let’s just say we put a dent in the Wahoo population that day. Local boy charters put us on them!

RESERVE YOUR NEXT FISHING CHARTER