Tarpon Fishing Fort Myers is not for the faint hearted nor is it for the angler that wants to catch tons of fish. Tarpon can be a finicky fish not cooperating on occasion, while other days they will eat everything you throw at them. The hook up to land ratio with tarpon is 1 out 3 on average. However there are days we never lose a fish and other days we go 0-10. Fishing for tarpon is hands down the most frustrating, aggravating fish to target. At the same time it is the most adrenaline pumping, exciting, rewarding, exhilarating, exhausting and most incredible experience any angler can have, period. Its level of difficulty and awesomeness is what makes it so special and Capt. Josh’s favorite fish in world to target. 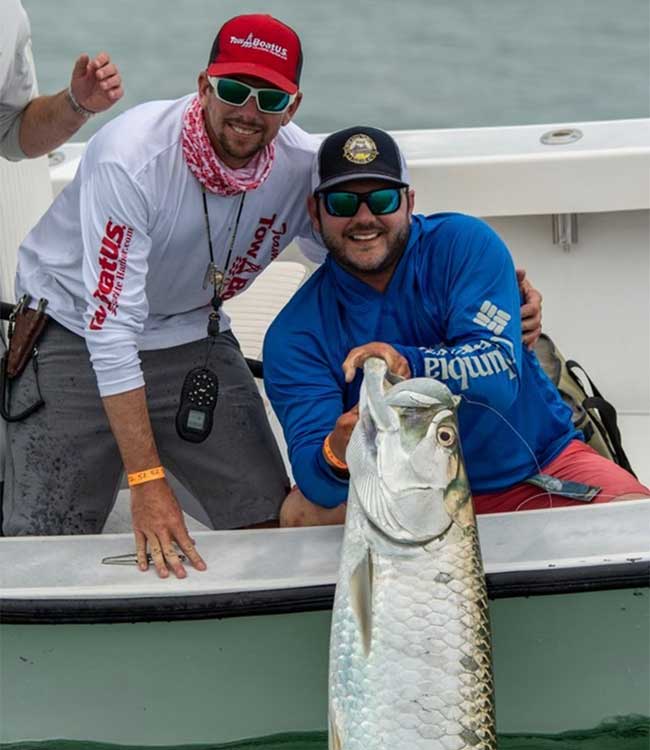 Tarpon have been around since the dawn of time and it shows in their distinct prehistoric look and size. They are dinosaurs and the most awesome specie to target. Sanibel Island is actually where the first tarpon ever was caught on rod and reel in 1885 by Chicago architect William H. Wood. Tarpon bay is the actual name and spot where the very first tarpon was caught. Tarpon fishing helped put Fort Myers on the map. Fishing for tarpon is very seasonal as goes for sheer numbers of fish in our area at specific times of the year. Tarpon are highly migratory species. Prime time tarpon season is late April, May, June and early July. It is not uncommon to see some tarpon show up in late February and in March. It really depends on water temperatures and weather. Fort Myers does have residential tarpon. Most commonly they are caught at night around the Sanibel, Caloosahatchee River and the Charlotte Harbor bridges. Late summer and early fall can also be a fantastic time to try your luck with the King. Fall can be hit miss just like February and March. If you happen to time the fall bite just right…its EPIC! Everything has to be right to get them during off season. If they are here you bet we will be fishing for them Caloosahatchee Cowboy Charters.

ANGLERS COMING TO FORT MYERS TO TAME THE KING

Anglers coming to Fort Myers in attempt to tame the king …. You must be VERY patient, VERY determined, and VERY willing to put in the time, sun up to sundown (if you are super serious about catching a tarpon). Tarpon are magnificent creatures that test your patience, hunting skills, and make you spend countless hours and dollars just for a shot to make them jump. Trust me when I tell you it is worth every ounce of energy and effort. If it is the stars for you get a tarpon it will happen, I promise.

There are numerous methods, ways and approaches to use while targeting the world famous “Silver King”. Capt Josh’s ultimate favorite method of catching tarpon is live baiting with threadfin herring, crabs, mullets, or lady fish free lined or under a cork on the flats or off the beaches. Off the coast of Sanibel (Knapps point) is Capt. Josh’s ultimate favorite tarpon spot. He has won tournaments out here and so have some of his dear Captain friends. Out here off the coast of Sanibel tarpon show up by the hundreds and thousands at times every year to feast on big schools of threadfins. Usually around the moons the tarpon will be more grouped up and in big schools. When the fish are like this it’s usually a jack fest. Doubles, triples and even quadruple hook ups are not uncommon. This usually happens around the 2ND moon in April, both moons in May and the first moon of June. By middle May there are Tarpon all up the coast of South West Florida ranging from Naples all the way up to the world famous Boca Grande Pass aka “The Tarpon Capital of the World”.

Hill tides are the moon tides mentioned above. On these hill tides specifically the last moon of May and first moon of June are typically the best two crab flows of the season in Boca Grande Pass especially. On these tides pass crabs will flow out by the thousands through the pass. The tarpon know this and sit in the pass to gorge themselves on the crabs. If you have never experienced a crab flow in the Capital this is quite a remarkable experience and one heck of a time to fish! Before the crabs flow, giant schools of giant tarpon will group up by the hundreds and begin to “fall out” of the pass making their way deep offshore to spawn. If you pick the right group it can be rip fest with 20-30 boats taking turns getting in front of the school, all hooking up. As days go by the groups that leave previous will come back to feed on the crabs while other groups will head offshore to spawn. This rotation cycle of fish will happen every day during these moon tides. Two to three days before and after the moons seem to be the best to experience this phenomenon.

Tarpon will continue their migration north. By late summer (middle June early July) most of the fish are on the North beaches and flats of Captiva Island, North Captiva, Cayo Costa, Boca Grande, and Gasperilla. Normally this time of year the Tarpon like to bite very early in the morning and late afternoons on those big out going tides.

Night time tarpon fishing the Caloosahatchee River bridges and Sanibel Bridges are one of Capt. Josh’s favorite past times and closest thing to a guaranteed tarpon bite he can give is customers. At Night the tarpon can be extremely active and feed really well. Using live lady fish is a go to for making the night bite happen. Floating big live baits can generate incredible surface strikes right behind the boat on the shadow lines and eddies on the back sides of the bridge. However at night you lose the dancing spectacle the tarpon gives because it’s so dark out. A major disadvantage of fishing the bridges at night is the bridge itself. Tarpon are massive and smart and will do everything thing can to shake your hook or break you off on the bridge. They use the tide and bridges to their advantage. Don’t let this discourage you because customers will typically get 4-10 bites or more on a hot night bite. 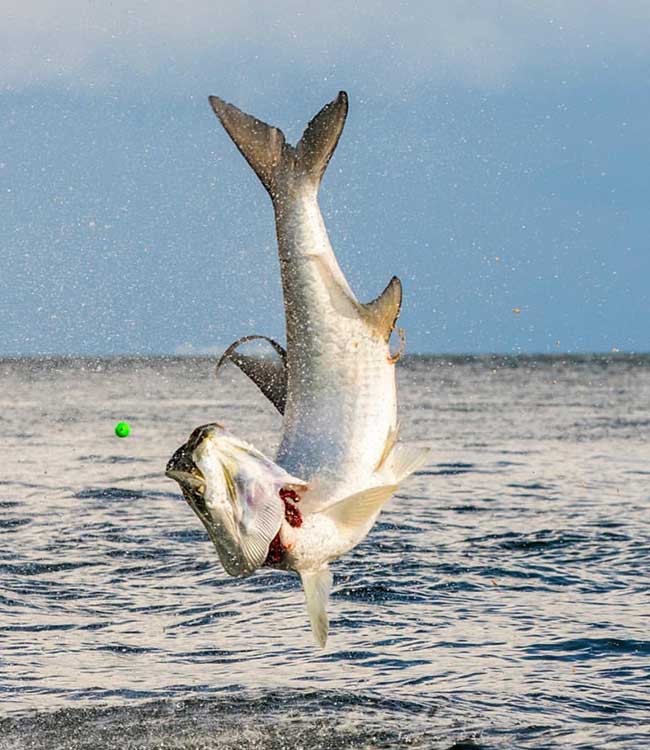 
RESERVE YOUR NEXT FISHING CHARTER