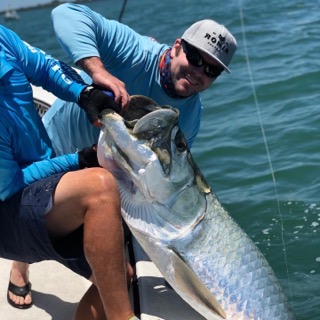 A fishing adventure isn’t complete without tarpon fishing. Fortunately for anglers, this mighty tarpon swims around Florida all year round. However, fishing for them in some months requires more patience than in other months. These tarpons prefer the warm summer waters more than the cool ones.

The prime tarpon fishing season starts Mid-April until July. However, if the water temperature starts warming alright in March, tarpons will also begin to swarm around and feed on Florida shores. This silver king fish likes it when the temperature hits about 70 to 80 degrees Fahrenheit.

Come August through October; tarpon fishing is still a hit. However, it occasionally slows down whenever the water temperature gets too high. Meanwhile, big cold fronts start hitting Florida around mid-October so catching tarpon becomes extra challenging. It becomes a time for offshore tarpon fishing, which is suitable for bottom fishing and wreck fishing.

Tarpon fishing is still occasional during November, December, January, and February. The most exciting and thrilling tarpon season is in March.

RESERVE YOUR NEXT FISHING CHARTER